I have had many incarnations of blogs in the past, all of which I gave up on. I have come to think that this was because I had been trying to be somebody I was not, trying to write about things that I thought would make me come across as intellectual or hip, both of which I am not. So this my new blog, and hopefully the last one I will ever begin, and this blog is going to be about what I really know and love - books.

And yes, you might say that books as a theme for a blog couldn't be anymore intellectual, however the books I love, the books I truly love and remember forever and can never let go of, are never the kind considered intellectual. I read alot. I buy between one and three new novels a week, it's an addiction that I refuse to give up. The books I read are mostly within the sphere of fanasy/sci-fi/horror, although I will give anything a try. YA fantasy is my one and only true weakness, I'll still be reading it when I'm fifty. Some of us will never quite be able to quit romanctising our teen years, I look on them so fondly now but they were agony to live through. I think I only realised how bad the addiction was when I was moving rooms this week(I had been in the same bedroom for ten years) and realised just how much effort it was going to take to move all of the books I own. In my new room I have some lovely shelves from which I can gaze at my collection with a mixture of pride and shame. Here is a snapshot of some of them: 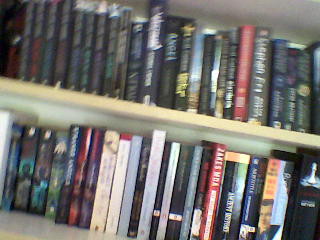 Anything that isn't a novel was most likely bought for college or because I felt like deviating from my path of buying books that entail a romantic story line intertwined with action/adventure/mystery.

Another good thing about my new room is that it is not an attic, which the previous one was, which means I can actually look out of my window and see the world rather than only being able to see the sky, which is nice, but I prefer green to blue, leaves to clouds. Here's my new view, it's dull today so the picture didn't come out quite as cheerful as it appears when it's sunny: 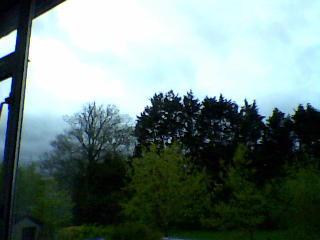 I'll take a sunny picture when the weather allows, it will be delightful.

So basically in this blog(about books and life) I will write about the books I am reading at the moment, and add in a few tidbits about what's going on in my life. It feels good to write it down, it's not just narcissism, I promise.. But more on that later. So right now I am almost finished City of Fallen Angels, the fourth book in Cassandra Clare's Mortal Instruments Series. I had been waiting the guts of a year for this book to come out, and I don't know about you but I tend to enjoy books more when I have the entire series to read at my leisure rather than when I have to wait. Perhaps it's because the continuity gets all messed up, when I can read one book after the other the story links together better and I remember what happened in the last book. When I have to wait a year I've forgotten a lot of things, and it takes a while for my aged 24 year old memory to kick in and go "ooooh yeeah, now I remember", this is a time consuming process.

Anyway, City of Fallen Angels kicks off a few weeks after the end of City of Glass, Clary's back in New York, with Jace (swoon) and the book is basically told half from Clary's point of few and half from her best friend Simon's point of view. I was wary of this because although I am fond of Simon(he's the equivalent in this series of Xander in Buffy in my opinion) I wasn't sure I wanted to read about him as a main character. It only took me one or two chapters to become fond of him in the way I am fond of Clary and began to trust him to be my guide through their world.

Simon's a vampire, but different from all other vampires because he can go out in daylight, he is also different because he has the mark of Cain on his forhead which means that anybody who tries to kill him will be punished sevenfold(I think). Don't quote me on that I'm terrible for remembering facts. Strange tracksuited characters keep turning up and attacking Simon so he knows that somebody has it in for him, he just doesn't know who that somebody is. Also, Simon is dating both Maia and Isabelle at the same time, which is something of a ticking timebomb as you wait for them to discover he's been two timing them. It isn't because he's being sly, it's just because he's scared to tell either of them about the other and keeps putting it off.

A new character named Kyle comes into the story and auditions to be the singer in Simon's band, however Kyle is not all that he seems and you'll soon discover the twist to his true identity. And no, it's not Sebastien. That would be a little too obvious. On the Clary and Jace front, things are hotting up between them, but Jace keeps having dreams that whenever he tries to sleep with Clary he tries to kill her. I found this a little tedious as yet another reason why they can't be together after the whole brother and sister fiasco, but I suppose Clare does have to keep the interest going as to their relationship. Therefore throwing another spanner in the works for them, another barrier to their love, means there's going to be drama to keep the reader interested.

Okay so I won't reveal too much more about the storyline other than the whole thing is leading up to Clary's mother's and Luke's wedding(aww) and I have another hundred pages to read so I don't know what happens in the end yet. Overall I've really enjoyed this book, it still has Clare's tradmark humour(the mention of Magnus wearing a sari on his and Alec's trip to India) and action scenes, and there's still alot of Clary and Jace for those who loved the first three books.

Once I'm finished City of Fallen Angels I'll be moving onto Defiance by Lili St.Crow, the fourth book in the Strange Angels series. I can't wait to get into that and see what really happened to Graves after he disappeared in the last book Jealousy.

In other news, I had an interview over the phone with Google a few days ago. It was an absolute motherf***ing disaster. My throat was dry, my voice was shaky, my mind went blank even though I had spent the whole weekend preparing. I think my whole problem with interviews is 1.) I am a naturally introverted person, leftovers from my teenage gothic years, I am still gothic, I'm just a happy gothic now, and 2.) Irish people seem to be incapable of speaking about themselves positively. We are unendingly self deprecating and even when we are good at something we will never admit to it. Here is an example, this is a conversation between two american people after having taken an exam at school/college:

Person 1: Hey, so how do you think you did in the exam?

Person 2: Awesome, I really I aced it.

Person 1: That's great, I think I did great too, can't wait to get the results.

And a similar conversation between two Irish people:

Person 1: So how did you get on in the exam?

Person 2: Fucking shit, I bet I failed. (note. Irish people will give this reply even if they think they passed with flying colours)

Person 1: Yeah me too, I'm definitely going to have to repeat next year.

It's acceptable for Irish people to fail, it's even looked upon fondly. But if you admit to any kind of success people are like, "Jesus, your woman's a bit up herself isn't she." Anyway, I need to find a way to get over this, I'm seriously considering going to hynotherapy or something. Tomorrow is my last day of a job I have been doing for the past eight weeks temporarily, I'll miss the people(physical disability residents) but not the workers, well maybe one of them.

More of my final thoughts on City of Fallen Angel's in my next blog and what I think of how it ended. Also I'll leave you with with youtube video, if you're easily offended you probably shouldn't watch it. If you are religious or christian then DEFINITELY DON'T watch it, but for others, especially sceptics like myself, enjoy! I can't get it out of my head.