How My Blog Got Its Name

The name for my blog actually comes from the very first novel I began writing when I was eighteen years old. It was called The Umbrella Girl and I nearly wrote the whole thing out by hand, on paper. Those were the days when I didn’t own a laptop and there was no chance of me writing anything on my family computer for fear that someone would find it and read it while laughing mockingly all the while. Then they would confront me about the story I tried to hide and I would go red in the face and die inside.

So, to avoid this terrible fate I scribbled the story down on scraps of A4 paper and various notepads, all of which I shoved under a pile of books in my bottom drawer. I still have these writings, they might as well be heirlooms at this point because anything I write nowadays is solely electronic. Sometimes I think about classic authors like the Bronte sisters who would have to labor day in day out just to get their stories written. Can you imagine how bad their writer’s bumps were?
I think I read somewhere that the fantasy author Neil Gaiman still only writes his stories out by hand. Some might say that this is too much of a slow and laborious process, but when you think about it, it’s probably more productive. Whenever I sit down to write on my computer about 85% of the time I get distracted by the internet. A notebook does not have an internet connection, which is a bonus when you need to concentrate on writing.
When I decided to create this blog I didn’t exactly know what to call it, but then I thought about that first story I ever wrote and felt it would be appropriate to name a blog about books and writing and life after the story that would inspire me to devote my life to becoming a writer. The following is a brief description of The Umbrella Girl.

It was very a much a coming of age tale, centred around a girl named Ella, it begins briefly at her birth and is then separated into three parts, the first when she is fourteen, the second when she is sixteen, and the third when she is eighteen. Ella finds herself growing up in a house in the middle of Dublin city called Ladybirds. The bottom floor is a vintage clothes shop, the first floor is an artists’ club and the second and third floors are the private home of Ella, her mother, and her mother’s best friend.
There was a derelict building on Harcourt Street in Dublin at the time(I think it still might be derelict)and this was the house where I imagined Ella lived. It was number thirty-something if I recall correctly. I can’t find a picture of the exact house, but here is a picture of the street. 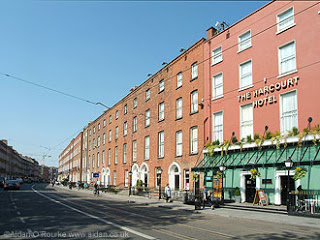 I think I basically created the childhood I wished I had. Ella is home schooled and grows up never meeting other children, instead she only knows colourful adults, such as artists, performers and musicians. I was so addicted to writing this story that I would find myself out with friends or at a house party and I’d just want to be at home writing about Ella. This is where my love of the imaginary began, and it was somewhat of a slippery slope as I realised that I didn’t have to live in the real world if I didn’t want to, I could sit at home in my room and create the perfect existence inside of my own head.
I know, it’s not exactly the same as getting addicted to crack or heroin, but it is definitely an addiction of sorts. Over the years I’ve been able to balance it out. I think it was the initial discovery of how much enjoyment and satisfaction writing could give me that meant it was all I ever wanted to do for a while. I’m sure this happens to most writers. Soon it dies down and you manage to join the real world again, but in a mischievous sort of way, you still have all of your story worlds in your head, and if you don’t want to be present for a while you can simply leave and go for a wonderful adventure through the cobblestones of your own imagination.
The story is called The Umbrella Girl because it’s what Ella’s mother sometimes called her. Ella goes through various struggles, heartaches and tragedies throughout her teenage years before finally finding her true calling in performance art. She paints her face white, her lips red, and dons a huge and theatrical vintage dress that tumbles along the ground as she stands on a box, still as a statue, her arm raised in the air, holding a bright red umbrella.
Maybe some day in the future I will take the pieces of paper I wrote Ella’s story on and type it out properly. I don’t know.
Or maybe I’ll simply leave her where I left her.