It has occurred to me that I am writing this blog for nobody at all, and it is absolutely liberating.

I saw an advertisement for Google Chrome the other day, where a father creates an email account for his baby daughter, and he just keeps writing to her about her life for years so that she can read it when she grows up. I think that's what this blog is for me, I want to come back here when I'm fifty and remember the person I used to be. The books I fell in love with. I have this belief that a person's personality, beliefs, preferences, etc. change every seven to ten years. So if that's true then I'll be a completely different person when I'm fifty. I will have changed approximately 3-4 times by the time I'm fifty.

So on to what I am reading at the moment, I recently read a book called "Green Rider" by Kristen Britain. It was published in '98 or '99 I think, so I'm kind of late to the party. It's set in a kind of Lord of the Rings, medieval typed fantasy world, where a girl called Karigan runs away from her boarding school, and as she is walking through the woods a horse comes galloping towards her with a dying rider slumped over its back. I'll tell you more in a moment, first I need to take a picture of the book cover and post it here, simply because it is gorgeous. The cover was what initially hooked me when I saw it in the shop. I know, I know, never judge a book...blah, blah, blah, but in this case the saying was wrong. For your viewing pleasure: 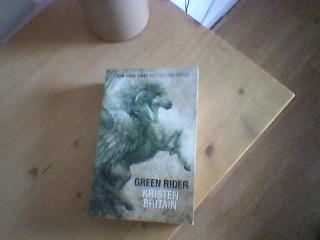 The horse really captured my imagination. Anyway, what happens is this: The dying man on the horse is a Green Rider, a messenger of the King, and he needs Karigan to finish his quest to deliver an important letter to King Zachary in Sacor City. The rider dies and Karigan reluctantly takes on his mission, meeting with danger and excitement all along the way. I seriously couldn't put this book down. It has everything a good story needs; adventure, fear, mystery, humour, romance. It's a fantasy adventure book that girls will love because the main character Karigan is so likeable. The writing style is similar to Neil Gaiman, or Mike Shevdon, but with the benefit of a female point of view. I feel terrible sexist these days when it comes to my book choices, if I see that a book is written by a man, I'll be kind of wary. Anyway, there's a sequel called "First Rider's Call" which I'm going to buy this week, so I'll let you know how that one fares.

I finally got around to reading Patricia Briggs Mercy Thompson series recently. I've been meaning to for a long while but just never got around to it. I've currently read three books in the series, the ending of book three was a surprise. I was so SHOCKED! And then I wondered why I was shocked. I found myself thinking, did Briggs have to do that to her protagonist? It made me want to slap myself. I think I've let all of the happy ever after endings that normally come with these urban  fantasy books, particularly the YA ones, to change my sensibilities. One rape scene and I'm ready to write a letter of outrage to the author. Well maybe not that, but I was certainly annoyed with her for a while over it. I think I need to balance out all of the fantasy I read with something a little more realistic.

So that's all for now, it's Sunday and it's raining outside and I'm about to watch some old episodes of My So Called Life. I remember being about eight years old and me and my best friend used to watch it in secret because we weren't allowed. All of the characters seemed so grown up to me back then, now I look at Claire Danes, and think, god she was so young.

Ta-ta until next time:-)

One response to “New Ventures and Writing for an Imaginary Audience”