The Christmas reading season is in full swing and since this is my favourite time of year (because I get to wear cosy pyjamas, eat delicious food and read for at least 3 days, lol) I thought I’d do a little sale. From now up until the release of Tegan’s Power you can get all the other books in the series for either free or 99c! Check below. 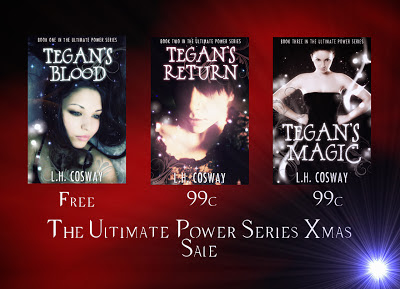 Now, in the mood for a Finn POV teaser? Your wish is my command…

Once we’re clear of the vamps I let out a long breath. We’re close to the more residential areas now, which look completely untouched by the chaos. The quiet, peaceful streets feel
almost unreal after the craziness we’ve just been through.

Gabriel pulls Alvie close to him, his arm tight around his narrow shoulders. Ira rubs his nose against Delilah’s hip and she lets her hand drift through his thick fur. All of a sudden, I feel decidedly alone. No partners to comfort me.

Oh well, fuck that shit. I’ve been alone since my mother and sister died. Some things never change. A brief image of Tegan in my arms flashes in my head, my hand down her pants feeling her slickness, my tongue down her throat searching for her tonsils. God, I’d been such a fool to think she actually wanted me. That she’d actually choose me.

Okay, no more self-pity, thank you very much, brain.

I’m tough. I’ve survived a lot worse than a bit of female rejection in my time.

Once we reach the outskirts of the city I decide to begin looking for some form oftransportation. Walking isn’t going to get us very far in the long run. A few minutes later I spy an abandoned minivan by the side of the road, the doorsopen, keys dangling from the ignition. Too good to be true, right? Wrong.

There are several dead bodies littered on the ground outside of it. By the looks of it, they were driven mad by the chaos and killed each other. I stand over a bloated middle aged guy with shaggy red hair, his lifeless head hanging to one side. With the toe of my boot I nudge his shirt collar down, checking his neck for fang marks. None. My suspicions were right, these poor sods killed each other.

“Looks like we’ve found a ride,” I tell Gabriel with a morbid grin.

He shakes his head, unwraps Alvie from his hold and comes to help me shove the dead guy out of the driver’s seat. His throat has been slit and there’s literally blood everywhere.In my line of work, I’m used to it. Still, that doesn’t mean I’m looking forward to sitting in the shit. His slack body drops down onto the hard ground like a bag of wet sand and I find a coat in the back of the van to wipe away most of the blood from the driver’s seat.

Checking the dash, I see that the tank is three-quarters full. Handy. I slide in and turn the key in the ignition, the engine roaring to life. Sticking my head out the window, I call, “Hop in boys and girls, we’re off for a picnic.”

Delilah gives me an irritable look. “You always have to be such a fucking piss taker,” she mutters, slipping into one of the back seats with Ira.

She huffs, narrows her green eyes to slits and turns her head away, ignoring me.

“All aboard?” I shout jovially, letting my arm hang out of the open window and banging hard against the metal door. Nobody answers. I pull away from the side of the road.

We’re only driving for about five minutes when all of a sudden, and I shit you not, a white stretch limousine with tendrils of pearly, effervescent light shining from the windows like beams of heavenly rays speeds out of nowhere and overtakes the minivan. With my driver’s side window open, I hear a sharp female cry for help erupt from inside the limo.

I increase my speed, following it, when all of a sudden one of the doors flies open and a woman dressed in a shimmery white evening gown jumps from the vehicle. She rolls along the road, huddles in a crouch for a moment and then gets to her feet. She begins running like her life depends on it.

She’s about to come face to bumper with the minivan so I pull on the breaks and come to a screeching halt seconds before I would have hit her.

“What’s going on?” Gabriel asks urgently, squinting his eyes out the window at the dark road ahead.

Before I get the chance to answer, I see a really tall guy emerge from the limo. He comes marching determinedly after the woman. I look back to the woman who is now staring right into the window of the minivan, shaking like a leaf. She’s got long, curly blonde hair and crazy golden eyes.

I hop out of the minivan and hurry to her.

“Are you okay?” I ask her as her eyes flicker over me in an unfocused manner.

“Stay away,” she croaks, holding out her shaking hand at the same time the guy from the limo calls, “Touch her and die, Slayer.”

I look to the tall guy, now recognising him as Michael Ridley, one of Theodore’s warlock arseholes.

The others have emerged from the van, coming to stand beside me.

“Just try it, Warlock,” I sneer back at him.

“Allora, come back here now. You are being completely unreasonable.”

The woman, Allora, flinches at the sound of Ridley’s voice and takes a step toward me.  “Please, don’t let him take me. It hurts…he hurts me too much.”

At this statement my protective instincts kick into high gear and I pull her to stand behind me.

“You hurt women, huh?” I ask levelling my eyes on Ridley. “Why don’t you try hurting me instead, see how well you fare?”

Ridley huffs out an angry breath and raises his hand into the air, on the verge of casting a spell. Thankfully, Ira leaps at him with a snarl and clamps his big teeth down on

Ridley’s hand before he gets the chance to finish. I wince when he doesn’t just bite him, but jerks his head and tears the hand clean off.

Well, Ira does have some, uh, issues with magic, so I can’t really blame him for his slight overreaction.

An almighty wail erupts from Ridley. He stares down at his now handless arm in horror as blood gushes out. Ira allows the hand to fall to the ground with a wet thump and then walks away with doggy style disinterest. Yep, I just said doggy style. It’s been way too long since I last had a woman beneath me.

“You’ll be killing no one unless you get yourself to a hospital real soon, my friend,” I tell him, wincing at the sight of his severed hand.

He swears profusely, picks up his…hand, and then hurries back to his limo. The door slams shut and the vehicle tears down the road. I turn to see Allora running away from us now, in the opposite direction of the limo. Gabriel, Alvie and Delilah stare at her,dumbfounded. Ira sits by the side of the van, licking the blood off his paws.

I decide it’s going to have to be my job to go after her. I run down the road but she seems to hear me coming because she quickens her pace. It must be awfully painful running in those bare feet on the gravel. A second later I catch up to her, grabbing her by the waist and pulling her to a stop. She wriggles in my hold, struggling to break free.

“Let me go, please,” comes her throaty cry. It sounds like she’s on the verge of tears. “I need to get as far away from him as possible. I need to find my family.”

“Hush,” I whisper soothingly. “You’re not going to get very far in your state. Let me help you.”